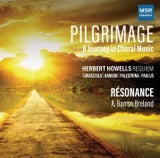 1. a journey of a pilgrim; especially: one to a shrine or a sacred place

The Pilgrimage recording project was named in a quite straightforward fashion. In 2017, Résonance was invited to perform Haydn's Lord Nelson Mass with the Steamboat Symphony Orchestra in Steamboat Springs, Colorado, at Holy Name Catholic Church. Holy Name, at the time, had in residence a fully illuminated St. John's Bible, an artifact of the faith which had inspired many people to make pilgrimage to Steamboat Springs to see it. This collaboration was to be Résonance's inaugural engagement outside the greater Omaha and Lincoln, Nebraska, metropolitan areas; thus, it was decided to program the ensemble's separate concert portion of the performance around the idea of pilgrimage. The repertoire we selected for Pilgrimage speaks directly to this theme whether representing the act of pilgrimage by journeying down to the river to pray, or 'a-wand ring' through this world of woe, or echoing the voices of the faithful who live their lives on spiritual pilgrimage to enlightenment and oneness with their chosen Creator in songs of their faith.

The concepts of pilgrimage and journey themselves as they relate to the ensemble itself entered the process of programming this album as well. In addition to coming about as a result of Résonance's first out-of-state tour, this project would also become the ensemble s first recording: the initial visit to the 'shrine' of creating an artifact for public consumption instead of its heretofore live-only performance history. It was fitting, then, to find ways to mirror the pilgrim s progress from familiar home territory at the outset to environs further afield after all, part of the value of pilgrimage is found in the leaving of home for places unknown. Thus are included both familiar staples of the choral repertoire, such as the Palestrina and Paulus works, as well as lesser-known but equally compelling works, like Howells' Requiem.

Finally, pilgrimage itself is rarely the fruition of the spiritual journey. The pilgrim is changed by the journey and arrival at the destination, embarking again afterward with new perspective and new goals. Similarly, this project has taught Résonance much about its purpose, process and passions. Equipped and empowered with newfound knowledge, further unforgettable experiences await future Résonance audiences.